Open Face Chinese poker (OFC) is an exciting and new poker variant which is quite different from the existing dominant variants of poker. Since it is currently in its nascent stage, OFC poker is still an unexplored online poker variant compared to its popular counter parts such as Texas Hold’em and Omaha. Thus, both live and online OFC poker players find some common challenges when devising a full proof winning strategy.

While, it isn’t uncommon to face friction at the Open Face Chinese poker tables even by seasoned poker players of the day, today, we shall kill these hurdles for good and focus on forming strategies that shall take you to showdown without unnecessary hiccups.

In our last blog, we talked about Open Face Chinese poker for real money and its strategy. Today, we’ll be revealing the common mistakes players committed by the players of this new poker variant and fix them right away. 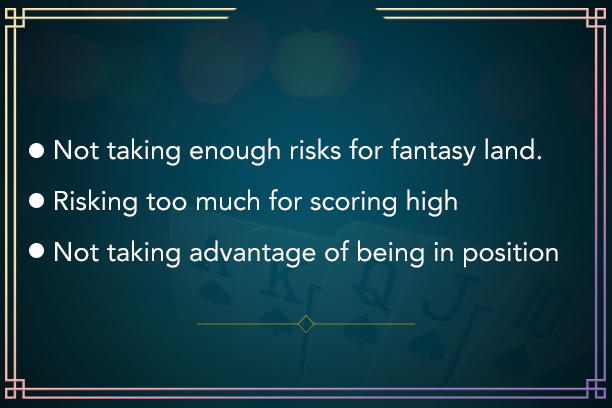 First of all, what is fantasy land? In this part of the Open Face Chinese poker game, qualifying for the fantasyland gets you additional royalty points. If a poker player manages to set a pair of Queens or better in the top and manages not to foul, they enter fantasyland as per OFC poker rules.

Following the Pineapple OFC poker rules, a player is dealt with 14-17 cards in one go after qualifying for fantasy land. No contest, this puts you at a great advantage.

The fear of fouling and getting scooped often stops us from taking risks on the OFC poker online tables. You should ideally enter a game knowing that it’s not about hitting a great OFC hand more than 60% of the time, but about scoring higher on average. So, we say you just aim to build a better hand than your opponents and you’ll definitely be ahead in the game.

An Open Face Chinese poker player often tends to go overboard while aiming to score as high as they can. For example, trying to put aces up top will require you to put at least two pairs or better on the middle row and full house or better on the bottom. However, this is easier said than done when you actually sit and play OFC poker. It’s clearly a runner-runner situation from where there is no point of return if the cards don’t come out in your favour.

There’s a common notion among online poker players in India and abroad that position doesn’t count when you play Open Face Chinese online for real money or for free. This is perceived due to the open-faced format of the game. However, this isn’t true. If you’re the last one to act on a 3-handed OFC poker table, you can place your cards accordingly.

For example, if you have a couple of hearts on you and you see 5 hearts already on the table, it would be foolish to sit with a flush draw.

Another take on this:

On the contrary, you could be a vigilant player too. Observe your opponents’ cards and see how many outs you might have in order to hit a royalty. In the later stages, you’ll still be ahead in the game because now you know the draws your opponents might be holding.

We are offering you another reason to be happy. PokerBaazi is offering double Reward points this month on PokerBaazi’s OFC cash tables during Happy Hours! Play on all online poker cash tables (including Open Face Chinese poker tables) between 3 AM and 9 AM and earn 1.5X Reward points on every game.

What help does this offer?

Well, you can now claim your favourite Baazi Rewards 1.5 times at twice the speed. Baazi Rewards is our trendsetting Loyalty Rewards program which rewards you immensely for your love for poker. It includes prizes such as Jaguar Xf, Toyota Fortuner, iPhone 11 Pro and the mother of all, an all-expenses paid trip to Vegas.

So, it’s time to use your newly acquired skills on PokerBaazi’s OFC cash tables and climb the Rewards ladder faster than ever! See you at the felts.

More in this category: « Learn How to Play on a Short-handed Poker Table 4 Easy Tips for Error-Free Start in Online Poker Games »
back to top