Pot-Limit Omaha also called Omaha shares several similarities with it’s not-so identical twin sister, Texas Hold’em. However, the small differences in the poker rules of the two cause a huge difference in the poker strategies the two poker variants are played with.

A well-known difference between Pot-Limit Omaha and Texas Hold’em is that in the latter, each player is dealt with two hole cards and in the former, four or five. Out of these cards, he/she uses two cards to build a strong poker hand. As a matter of fact, in pot-limit Omaha it is mandatory for a player to use only two cards out of the four/five hole cards he/she gets.

Another crucial difference between the two is that in PLO you require almost an invincible hand (such as nut flush or nut straight) when it’s time for a showdown. This is necessary because you are not the only player on the table who has four/five cards to choose from. You and your opponents had several outs to hit a strong hand by this time.

In pot-limit Omaha, players can bet up to the total size of the pot as opposed to the total size of their own chip stack in Texas hold’em. Since the betting structure is different, the Omaha poker strategies that come along with that fact are entirely different for these poker variants. Preflop game strategy in PLO therefore becomes much more intense. 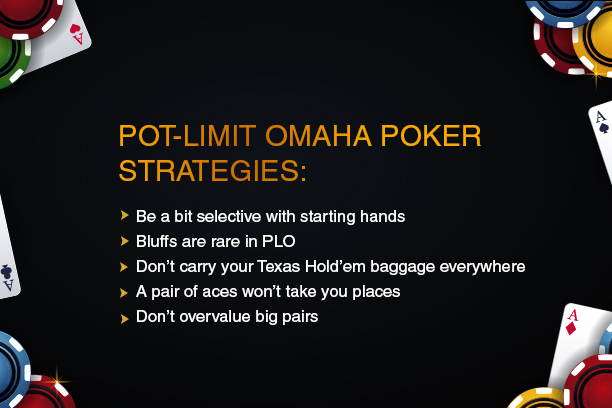 Do not forget that all your opponents have four/five cards to hit a great hand. Preflop PLO hands run closer than preflop Hold’em hands in terms of equity.

Don’t think that you can play with any four cards you get. A smart, strategic move in PLO poker is to be selective.

In pot-limit Omaha, most poker players in India and abroad do not bluff which means betting confidently is a sign that your opponent has most likely hit an above-average hand.

Poker players in India and abroad mostly prefer playing Texas Hold’em so it is likely for them to carry their tricks and strategies to the PLO tables. Using hold’em strategies would be the last thing you would want to do on PLO tables.

In PLO, there are very lean chances for you to win a pot with a pair of aces especially if it’s a multi-way pot. If you hit a pair of aces preflop, proceed only if the hand improves at flop.

Another significant pot-limit Omaha poker tip, hitting a big pair at showdown isn’t really a great hand in Texas Hold’em. However, in pot-limit Omaha it’s a rare occurrence for you managing to get something out of the pot.

What are Baazi Rewards now? Baazi Rewards is our loyalty rewards program that rewards you for your passion for the sport. It only operates on cash games, so hit as many cash games as you can and claim prizes such as iPhone 11 Pro, trip to Vegas, Jaguar Xf, MacBook Pro, real money and much more.

Winning in LACS and CRORES is an everyday thing on PokerBaazi, India’s most trusted poker site. Come hit the poker felts and join the winning league!

More in this category: « OFC 101: Fantasy Land and OFC Variants Learn How to Play on a Short-handed Poker Table »
back to top