Open-face Chinese poker is the latest rage in the country as it offers a break, filled with thrill and excitement. Are you a thrill seeker? Does that adrenaline rush make you an invincible poker player? Well, if that’s the case we must tell you that PokerBaazi offers several formats of Open-Face Chinese poker that keeps you on the edge of your seats. We offer three exciting OFC poker variants: regular OFC, progressive OFC and ultimate OFC. Now that’s thrilling enough to get all of the adrenaline junkies hit the OFC tables!

You might say that you’re all-in but don’t know how to play open-face Chinese poker.

Now that you know OFC poker’s basic rules, let’s learn how to play OFC during the initial stage of the game.

In order to build hands that let you score the highest on an OFC table, you need to learn the point system. Want to hit a strong hand in OFC? Build it keeping in mind the scoring system. For example, a four of a kind in the middle row gives you 20 extra points. 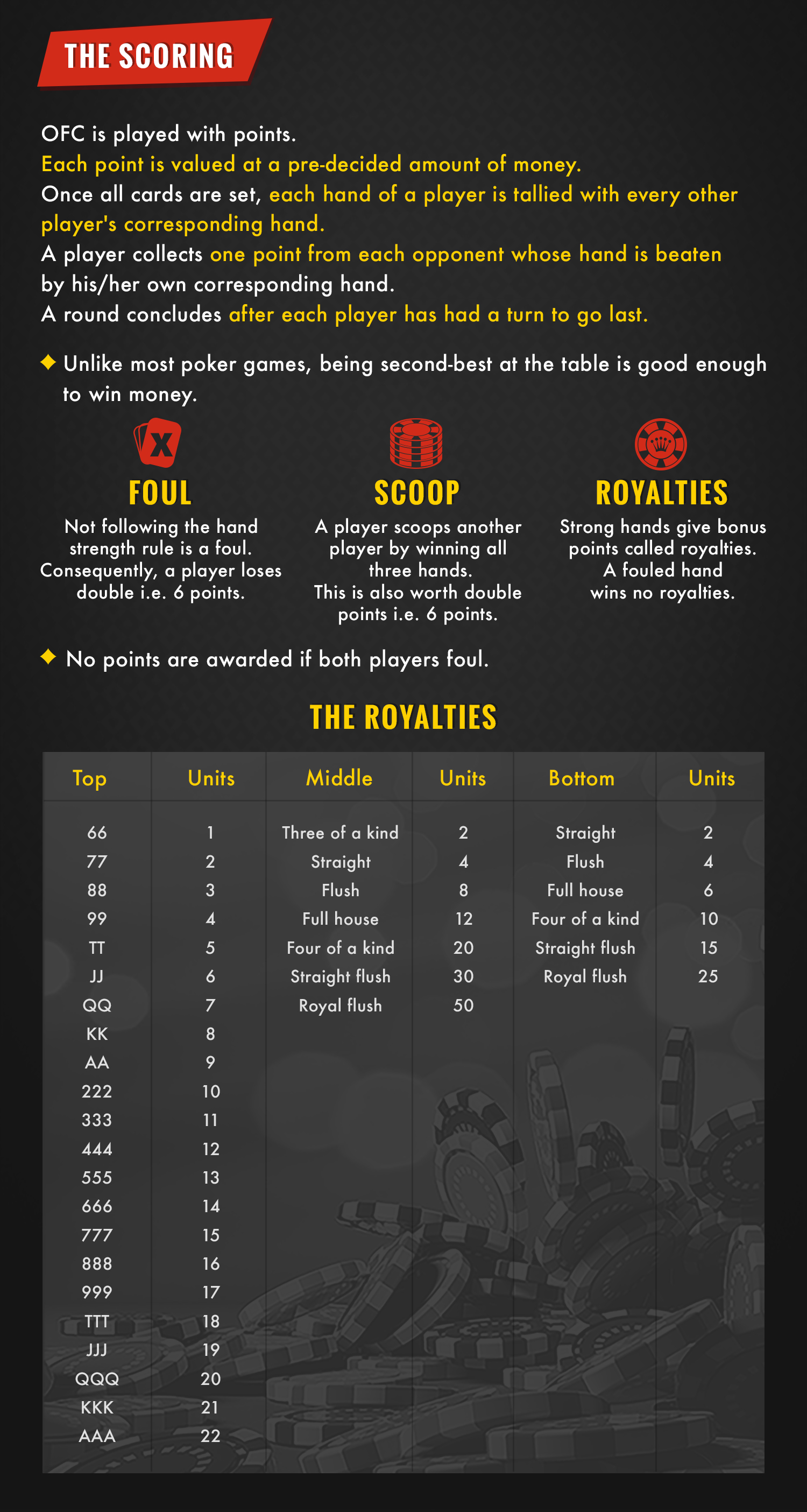 Many poker pros/experts believe that it is wise to try and go for the highest scoring possible hand right from the beginning. Worrying about fouling can be taken care of later in the game.

Not being in position makes it difficult for a player to freely act towards building the strongest hand with the first five cards. Entering fantasy land becomes much more difficult because you need to act aggressively to do the same.

However, if you find yourself in position, think and act towards entering fantasy land only.

While you’re working to set the strongest open-face Chinese poker hand, you need to keep an eye on your opponent’s cards. Be aware of what’s happening on the table. We’re pointing this out only because players tend to get engrossed in setting their own hand.

Keep an eye on your opponents’ hand. If it looks like he/she will end up setting a foul hand, try to play safe. Don’t make risky moves such as trying to enter fantasy land.

It’s time for you to reap the maximum benefits out of your newly acquired open-face Chinese poker skills. Currently, PokerBaazi is hosting OFC Cash Drive, a month-long online poker promotion that doubles your Baazi Reward points.

Double up your Reward Points with OFC Cash Drive

Get in on the open-faced, fast-paced action of pineapple open-face Chinese poker and start earning up to 2X Baazi Reward points till the 11th of January. There’s still time for you to catch up, climb up the Baazi Reward levels faster and claim your favourite prizes!

The exciting prize list offers rewards such as Jaguar Xf, iPhone 11 Pro, a trip to Vegas, MacBook Pro, redeemable chips up to 2,50,000 and much more.

Play open-face Chinese poker for real money by opting in with deposit codes and get up to 30% real cash bonus.

You’ve got enough reasons to ease your cravings of online poker adventures. You know what to do now!

More in this category: « No-Limit Hold’em: When Should You Slow Play? OFC 101: OFC Strategies to Keep in Mind »
back to top