For the serious poker player, participating in tournaments is an absolute must if you're looking to grow in the game. With attractive entry rates, guaranteed prize pools and great winnings, India's tournament poker circuit is in a great phase, and you should look to take advantage of it.

If you're new to tournament poker however, you may be nervous about spending on entry fees and then crashing out early. Don’t worry though, we've got some great tips to help you make it through to the later stages of tournaments.

In the early rounds of a poker tournament, the blinds are small in comparison to your stack, meaning it's easy to keep calling with mediocre hands in the hope you hit something on the flop. This is a mistake made by many beginners and is something you should absolutely not do.

The blinds may be small, but ten hands in you'll suddenly find that your stack is a lot shallower if you aren't winning. Even if you do get the chance to double up, it’ll be on a smaller stack and so the rewards won't be quite as great.

If you find yourself at a table with a lot of players like this then you're in luck. When you have a good hand/and or are in position, don’t be afraid to raise the pre-flop bet by 3X or 4X. Players without a good hand will usually fold, but loose beginners will still likely call. Even if you don’t hit anything on the flop, small continuation-bets are still a good idea because such players are also likely not to hit anything.

Overall, being tight but playing good hands aggressively will net you big winnings against such players in the long run.

Position is critical to success in any poker game, and this applies equally to tournaments. Not only does the relative value of each hand go up the later you play at the table, but you also get more information on your opponents hands when they bet first.

Eg. If you are holding 5-6 suited and are playing early, it usually best to fold because you don’t know how the opponent after you is going to play. If he makes a steep raise, you'll be forced to fold and give up the money you put in the pot. However, if you are last to bet and everyone before you has simply called, then you are in a much safer position to call as well, letting you see the flop.

PokerBaazi lets you take part in free-entry tournaments and earn money. Not only can this help you practice and improve your tourney game, but you can also bankroll your tournament entries from these winnings. With a game happening every 10 minutes, it's a great way to start your journey in poker tournaments. 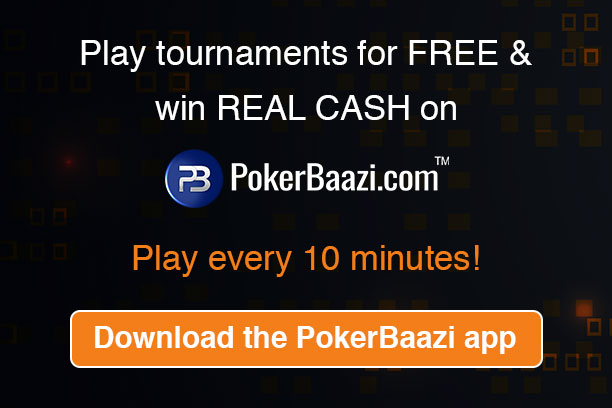 Get into big events through satellite tournaments

Satellite tournaments (Sattys) are smaller qualifying events with low entry fees that let you take part in the bigger tourneys if you win. As such, they are a great boon and a must-play for good poker players who want to maximise their winnings with a small investment.

For example, PokerBaazi's GameChanger tournament with a guaranteed prize pool of Rs. 2 Crore has an entry fee of INR 5,500. However, you can take part in sattys on PokerBaazi for just INR 250 and win an entry to the tournament at a much cheaper rate!