3 Patti online game starts when each player puts a certain amount of money into the pot. This sum can be categorized as a boot or ante amount. According to the 3 Patti rules chart, this is done to encourage the fear of losing money if the person decides to fold. The lost amount will be divided between the remaining players.

After the betting procedure is done, the players can play either blind or seen. A blind player is someone who hasn’t seen their card; in contrast, a seen player has looked up their 3 Patti cards.

Under 3 Patti real money games rules, you can both call or raise your card. If you call it, you will have to make an additional bet of the same amount as your previous bet. However, if you are confident about your game, you can increase your last bet by a certain amount.

There is also a specific limitation while raising a bet that the total bet amount needs to be lower than twice a previous player’s bet. Also, the bet needs to be in even numbers because a player playing blind bets half the average bet, and an odd number cannot be equally divided into two unique digits with no decimals.

If you are a blind player and the person before you are seen, then you will have to bet half or an equal amount of your previous bet. However, if the player before you are blind, then you can bet a maximum of twice your last bet.

If you are a seen player and your opponent before you are also seen then according to the 3 Patti game rules chart like poker rules, you can bet the same amount of your previous bet or double the stake. If the player before you are playing blind, you go for a maximum of four times your current stake.

Another primary 3 Patti rule includes Sideshow; you can request other players to show their cards. A person can only deny it a maximum of three times, after which they are forced to show it. The cards are then compared, and the player with the lower hand ranking had to fold their cards.

The game comes to an end after the final sideshow.

The player with the highest 3 patti hand ranking is bound to win the game. At last, when only two players are left, a seen player can request a blind player to show their card by paying four times their current stake. If both are seen, they can ask each other at the cost of two times their current bet. However, a blind person cannot ask for a slideshow.

3 Patti is a very popular game that originated in India. The game is also considered a replica of three-card poker and is also called “flush” or “flash” in many areas. 3 Patti is regarded as a sign of safe gambling and is very much promoted in Indian society.

The popularity of 3 Patti is mainly because of two reasons. One would be its simplicity to play, and another directs towards a religious story of the Hindus. 3 Patti is majorly played on Diwali, a significant Hindu festival. It is believed that Goddess Parvati played such games with her husband, Lord Shiva. The Hindu society believes to follow the same steps as their God to attain prosperity.

Also, 3 Patti rules are very easy to remember. There is not much calculation in the 3 Patti rules chart like any other Poker or Rummy games. People play it as a family bonding exercise and earn some extra cash at best poker sites.

3 Patti Rules - How to Play Game

3 Patti can be easily played with 3-6 players, using a 52 cards deck, excluding the jokers. Even before the cards are distributed, the players had to make a bet. It is the minimum amount of money the players had to contribute to the pot. After this, each player respectively gets three face-down cards.

Now, it’s time that players either make a call, raise, or fold like poker card game online. According to the 3 Patti game rules, a call means that the person moves forward with the game continuing the amount they put in the pot. A raise implies that the player increases the amount of the bet made at the start. Furthermore, if the player folds the cards, they want to discontinue the stake, and their previous bet amount will be distributed among other members.

Also Learn- How to Play Poker

Another 3 Patti rule chart includes that the bet made into the game has to be in equal amounts. For instance, if the player made an additional bet of 4 coins and the other raised eight coins. So, the prior player has to raise eight coins instead of 4.

The 3 Patti game is all about getting the best three cards and winning all the money. This is done by categorizing each card with a rank. The hand with the highest-ranking card will win from the other person with the lowest. Here is a list of all 3 Patti Hand Ranking rules that you must know to win the game-

3 Patti online games can be played in variant versions. Some of them are mentioned below-

What is the rule of 3 Patti?

3 Patti is the simplest of all online games, including poker and rummy. The players will first bet a certain amount even before the cards are distributed. Each player will then get three cards respectively; now, they can either call, raise or fold. After every round, the member with the highest hand ranking wins the game.

What is a high card in 3 Patti?

According to the 3 Patti game rules, a high card has no same rank or suit. The highest-ranking card will be AKJ, and the lowest would be 5-3-2.

How do you play 3 Patti at home?

3 Patti is mostly played at home during Diwali. You just have to distribute three cards to each player and follow all the 3 Patti game rules. The hand with the highest rank wins the game.

3 Patti is an extremely popular and fun game, which is super easy to learn. You can now play 3 Patti online by downloading an application on either your mobile or tablet. Here, you can also invite your friends or play with world-class 3 Patti players. You might also earn real cash by winning all the 3 Patti tournaments. 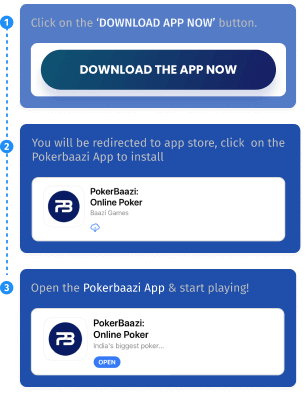